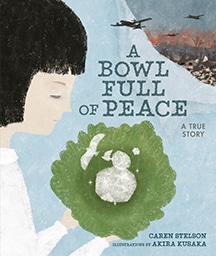 A Bowl of Peace: A True Story

In this deeply moving nonfiction picture book, award-winning author Caren Stelson brings Sachiko Yasui’s story of surviving the atomic bombing of Nagasaki and her message of peace to a young audience.

Sachiko’s family home was about half a mile from where the atomic bomb fell on August 9, 1945. Her family experienced devastating loss. When they returned to the rubble where their home once stood, her father miraculously found their serving bowl fully intact. This delicate, green, leaf-shaped bowl—which once held their daily meals—now holds memories of the past and serves as a vessel of hope, peace, and new traditions for Sachiko and the surviving members of her family.

Summary: A Bowl Full of Peace is a beautifully illustrated book about a Japanese family whose traditions are stronger than the harsh realities of the world. The book takes place prior to WWII in Nagasaki, Japan. The story follows the family through the atomic bombing of Nagasaki and afterwards for almost fifty years.

Vocabulary: (All vocabulary definitions are from dictionary.com)

any large homopterous insect of the family Cicadidae, the male of which produces a shrill sound by means of vibrating membranes on the underside of the abdomen.

a thick, white Japanese noodle made from wheat flour, often served in soup.

a self-propelled, cigar-shaped missile containing explosives and often equipped with a homing device, launched from a submarine or other warship, for destroying surface vessels or other submarines. Any of various submarine explosive devices for destroying hostile ships, as a mine.

a food fish, Scomber scombrus, of the North Atlantic, having wavy cross markings on the back.

a bomb whose potency is derived from nuclear fission of atoms of fissionable material with the consequent conversion of part of their mass into energy.

a bomb whose explosive force comes from a chain reaction based on nuclear fission in U-235 or plutonium.

Universal Theme:  The universal theme of this book is about the sharing of experiences to prevent future repetition of history.

Literature Themes that are represented in A Bowl Full of Peace