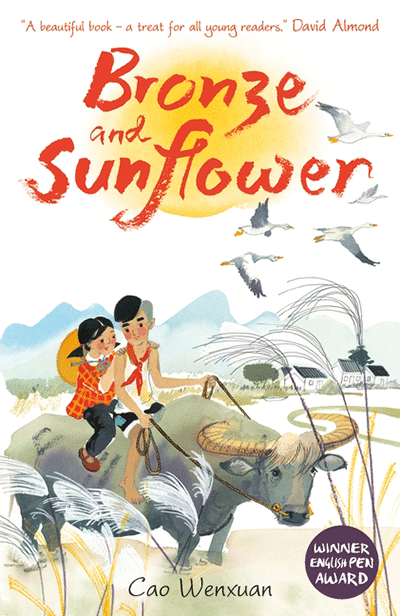 By Cao Wenxuan, illustrated by Meilo So, translated by Helen Wang (Candlewick Press)

Cao Wenxuan, author of Bronze and Sunflower, is one of China’s most esteemed and best-selling children’s book writers and has won several of China’s important awards for children’s literature. A professor of Chinese literature at Peking University, Cao Wenxuan has seen many of his books become bestsellers in China, and his work has been translated into French, Russian, Japanese, and Korean. Bronze and Sunflower is his first full-length book to be translated into and published in English. First published in England in 2016, it was the recipient of the prestigious Hans Christian Andersen Award. Published in the U.S. in 2017, it is now the winner of the Freeman Book Award for Young Adult/Middle School literature on East Asia.

Sunflower is an only child; when her father, an established artist from the city, is sent to the rural Cadre School for political “re-education” she has to go with him. Her father finds his new life of physical labor and endless meetings exhausting. Sunflower is lonely and longs to play with the local children in the village across the river. Bronze, a local boy from the village that she sees riding his water buffalo, is also an only child too and hasn’t spoken a word since he was traumatized by a terrible fire. Bronze and Sunflower become inseparable, understanding each other as only the closest friends can. Translated from Mandarin, the story meanders gracefully through the challenges that face the family, creating a timeless story of the trials of poverty, hardship, rural-urban divisions, the Confucian values of family and service to the society, and the power of love and loyalty to overcome hardship.

Interview with the translator

Archived Book Group Bronze and Sunflower. (Once you have created a login for yourself at asiaforeducators.org, you are able to view and access all current and archived offerings from the main page. One (free) login suffices for all).