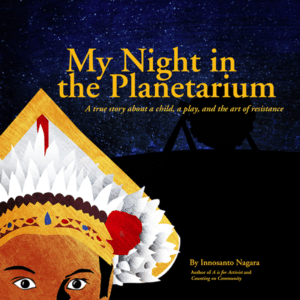 My Night in the Planetarium

The Indonesian-born graphic designer, Innosanto Nagara, shares “a true story about a child, a play, and the act of resistance” in his award-winning autobiographical picture book.  Starting with a lightly humorous overview of Indonesian history, through colonization by the Dutch, he leads up to 1977, a pivotal moment in his life, during the brutal rule of President Suharto. Nagara’s stunning illustrations depict a play performed in traditional Indonesian dance costumes created and performed by his father in which an unspecified army general is criticized. Police are sent to arrest his father and Innosanto and his mother flee from the production and hide in an adjacent planetarium. What could be a terrifying experience for a child becomes a night filled with the security of strong parental love and the magic of the stars. Nagara’s newest work, along with his earlier books, show the heroic potential of ordinary people and the power of art to challenge injustice.

Archived Book Group My Night in the Planetarium: A True Story about a Child, a Play and the Act of Resistance (Once you have created a login for yourself at asiaforeducators.org, you are able to view and access all current and archived offerings from the main page. One (free) login suffices for all)