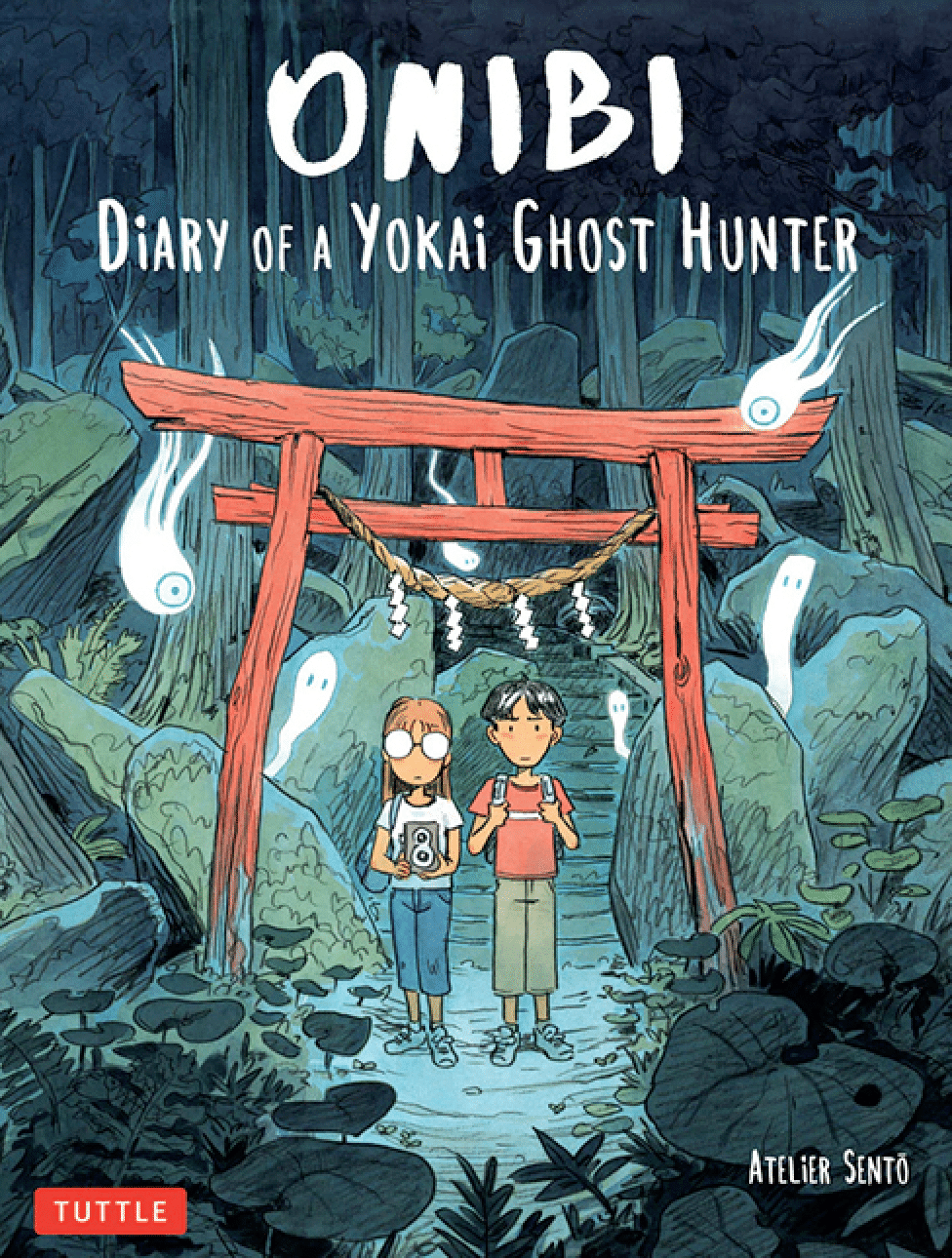 Onibi: Diary of a Yokai Ghost Hunter follows the adventures of two young foreigners as they travel to a remote and mysterious corner of Japan. Along the way, they purchase an old camera that has the unique ability to capture images of Japan’s invisible spirit world. Armed with their magical camera, they explore the countryside and meet people who tell them about the forgotten ghosts, ghouls and demons who lie in wait ready to play tricks on them. These Yokai, or supernatural beings, are sometimes kind, sometimes mischievous, and sometimes downright dangerous!

The Supernatural in Japan

Japanese culture, folklore, and religious systems have more manifestations of the supernatural than perhaps any other culture. This is partially due to the concept in Shintō that all things are to some degree alive. But Buddhism and ideas and stories imported from abroad also add to this rich cultural heritage. Even today, the supernatural are hugely popular with the Japanese public, appearing in books, scholarly theses, manga, movies, anime, video games and other areas of popular culture. Many of the characters and situations that students experience in video games come from the Japanese supernatural.

Places Mentioned in the Book

Sado Island is located off the coast of Niigata and is the largest island in the Sea of Japan. It was once a place of exile for Japanese. Prominent exiled figures include Emperor Juntoku, the Buddhist monk Nichiren, and the founder of Noh theater, Zeami Motokiyo. Today one of Sado Island’s most well-known attractions is the Earth Celebration, a festival hosted by the taiko group Kodo, who are world renowned.

The islands of Japan are dotted with hot springs. Bathhouses have been built over and around these hot springs, attracting tourists and locals alike. These are called onsen, and are often featured on Japanese television travel shows, as many boast of special types of mineral waters and other features. A typical onsenmight include a variety of services, including a gift shop, cafeteria, dining halls, massage, drink machines, and television. Bathing rooms are usually divided into male and female. Each section will have a dressing room with lockers and areas to bathe before going into the baths (complete with shampoo and soap). Once a person is clean, they can enter the rooms with the hot baths, and choose from a variety of hot temperatures. Bathing areas might be indoors or outdoors (discreetly fenced off from prying eyes) and are large and meant to be communal. Soaking in onsen is considered to be both therapeutic and relaxing.

Religion in the Supernatural

The two major faith systems of Japan that date back centuries are Buddhism and Shintoism. Buddhism came from India via China and Korea to Japan, and Shintō is the indigenous faith, and a form of nature worship based on the feeling that all things are animate and sentient. Both existed intertwined in Japan for centuries until the late 1800s. A Buddhist complex is called a temple and a Shinto complex is called a shrine.

This term literally means “bird perch.” It is a Shintō ceremonial gateway usually constructed of wood. The design is simple, with two vertical cylindrical posts surmounted by two horizontal posts. The upper horizontal post is rectangular but beveled in the upper surface to shed rain. The lower one is simply rectangular. Anytime you see a torii, it denotes sacred space.

Torii often appear at Buddhist temples, as the Shintō and Buddhist systems were intertwined for centuries, and not clearly set apart until the late nineteenth century.

Jizō is a Buddhist deity, a bodhisattva (Japanese: bosatsu) or enlightened being who forgoes nirvana in order to bring Buddhist salvation to others. Jizō is the protector of children and pregnant women in particular. In Japan, Jizō is often depicted in the garb of a monk, with a shaved head. These figures are often seen with bibs, as worshippers donate bibs to the Jizō statues, along with children’s toys and clothes. Worshippers also donate prayers that deceased children will travel safely with Jizō into an afterlife. Jizō may appear in groups at Buddhist temples or even alone along mountain trails or rural roads.

These are what we might call the entire realm of ghosts and demons. Within this larger category, there are all sorts of manifestations, from animals such as foxes (see below) to human ghosts, to inanimate objects that come alive.

The yūrei is a human ghost, often but not exclusively a female ghost. It was thought long ago that if a person died violently or had been cruelly abused, or died while experiencing emotional angst, then their spirit would be trapped between this world and the other. The yūrei might be the crying ghost of a young woman who had been abused by her master, for example. More typically, the yūrei tends to be an angry spirit, bent on revenge, for wrongs that have not been righted. She is usually depicted in Japanese art as having long hair, a white robe, and no feet. She floats in the air or can appear in the face of a paper lantern or other places.

Japanese foxes have long been considered to be one of the two Tricksters in Japanese lore, along with the “raccoon-dogs” or tanuki  狸 (pronounced: TAH-new-key). Both animals are native to Japan and were thought to be able to transform into other shapes (shapeshifters) and bewitch humans with their Trickster ways. Foxes in particular were known for appearing as Buddhist nuns or monks, or as beautiful women, with the object of tricking humans or luring men to their death. Unlike the archetype Trickster that often alternates between good and bad deeds (the American Coyote is a prime example), the Japanese Trickster is more often harmful than good. However, there is a story of a fox who was rescued by a man from hunters, and then came to the man transformed into a beautiful woman. She married her savior, gave birth to a child, and then eventually shapeshifted back into her fox form, leaving him with the gift of the child as a thank you.

Foxes are also connected to the Shintō deity Inari, the deity of agriculture, particularly rice cultivation which is a staple food of Japan. Thus, fox statutes will be found alone or in groups at Inari shrines, or sometimes even by themselves along a forest road or village street. In this context, the fox is considered to be a messenger of Inari and is benevolent.

A will-o’-the-wisp. The Japanese literally reads “demon fire.” It is a type of ghostly light. One of the types of onibi is the kitsunebi, which is the fox fire of Japanese lore. The fox fire is a hypnotic lure that leads travelers astray from the road on which they are traveling. Foxes are thought to be seen with balls of light or fire, particularly at night in graveyards.

Balls of Japanese sticky rice have been a staple of travelers since the Tokugawa (Edo) Period in Japan (1615-1868). Onigiri traveled well, as they could be wrapped in seaweed and eaten while on the road. They also can contain cooked vegetables, meat, fish, or preserved or pickled fruit in the center, making for a light meal. Today you can buy onigiri everywhere in Japan, from convenience stores to large supermarkets. It is a stable snack food and children in particular are fond of onigiri. It is one of the preferred foods of foxes in Japanese lore.

Tempura is vegetables, herbs, meat, or fish fried in a very light batter. This dish originally came from Portugal but was refined over the centuries to have a particularly Japanese flavor and appearance. Udon are thick, chewy Japanese noodles made from wheat, and they can be flat or rounded. The two together are a dish served in broth, with the tempura on the top, in a bowl.

Author: Brenda G. Jordan, director of the University of Pittsburgh coordinating site for the NCTA
2021