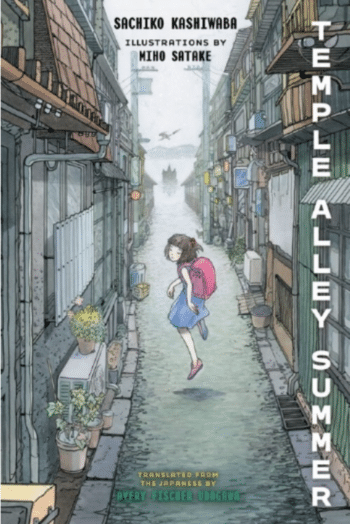 Kazu knows something odd is going on when he sees a girl in a white kimono sneak out of his house in the middle of the night—was he dreaming? Did he see a ghost? Things get even stranger when he shows up to school the next day to see the very same figure sitting in his classroom. No one else thinks it’s weird, and, even though Kazu doesn’t remember ever seeing her before, they all seem convinced that the ghost-girl Akari has been their friend for years!

When Kazu’s summer project to learn about Kimyo Temple draws the meddling attention of his mysterious neighbor Ms. Minakami and his secretive new classmate Akari, Kazu soon learns that not everything is as it seems in his hometown. Kazu discovers that Kimyo Temple is linked to a long forgotten legend about bringing the dead to life, which could explain Akari’s sudden appearance—is she a zombie or a ghost? Kazu and Akari join forces to find and protect the source of the temple’s power. An unfinished story in a magazine from Akari’s youth might just hold the key to keeping Akari in the world of the living, and it’s up to them to find the story’s ending and solve the mystery as the adults around them conspire to stop them from finding the truth.

Fill out the online form to access the NCTA webinar with Sachiko Kashiwaba, author, and Avery Udagawa, translator

A July/August 2021 Kids’ Indie Next Pick