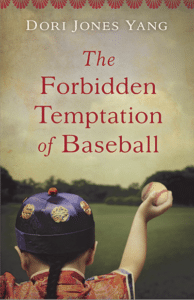 The Forbidden Temptation of Baseball

The Forbidden Temptation of Baseball is a lively, poignant, and nuanced novel based on a little-known episode from history, when 120 boys were sent to New England by the Emperor of China in the 1870s, long Manchu mandated braids down their backs, to study. Woo Ka-Leong (Leon) and his brother, Woo Ka-Sun (Carson) reside with the Swann family in Suffield, CT. Through Leon’s expectations and his confrontations with alien customs, the reader learns about both pre-modern Chinese and Victorian-era American societies and technologies. The novel features several appendices, including a short bibliography, questions for discussion, and trivia for readers who will want to learn more. The boys’ experiences are both timely and timeless.

The book gives American readers a glimpse into what it feels like to be a foreigner in the United States and will spark thoughtful discussion.

Archived Book Group The Forbidden Temptation of Baseball. (Once you have created a login for yourself at asiaforeducators.org, you are able to view and access all current and archived offerings from the main page. One (free) login suffices for all)