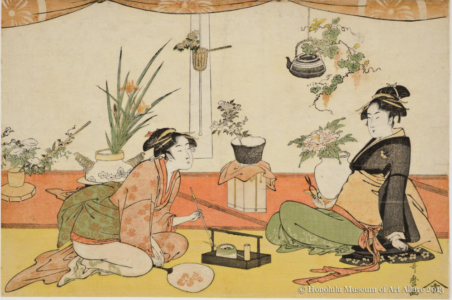 The Japanese art of flower arrangement has its origins in the formal offering arrangements used in the altars of Buddhist temples, but became more prominent in daily life with the development of the architectural feature tokonoma, or alcove. Join us for a presentation by Dr. Brenda Jordan on the relationship of ikebana to the practice of tea as well as to daily life from the 1600s to today. We will look at how ikebana was part of an expansion of artisan products and landscape design in the last four centuries, and how that has carried through to today’s use of flower arrangements in Japan. Some attention will also be given to the balance between control and lack of control in ikebana, for much like the art of landscape design, there is a interaction between the designer and the natural features of the plants and environment in these types of arts. The workshop will also include a short film, Ikebana, as well as a demonstration by Pittsburgh Sogetsu instructor Reiko Nakajima.