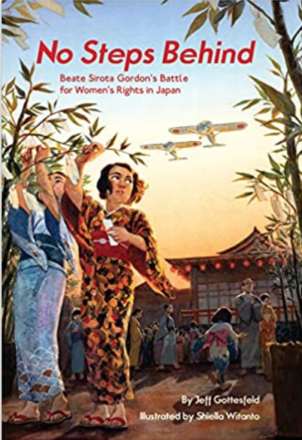 No Steps Behind, with author Jeff Gottesfeld

Join author Jeff Gottesfeld as he discusses his children’s picture book No Steps Behind, about Beate Sirota Gordon. “Beate Sirota Gordon (1923-2012), daughter of Russian and Austrian Jews, moved at the age of 5 with her family to Tokyo, where she was immersed in Japanese language and culture. The outbreak of World War II formed a backdrop to college studies in California that opened her eyes to gender equality. In 1945, Gordon returned to Japan as an interpreter for the occupying U.S. Army. There, she drafted clauses for the new Japanese Constitution that granted Japanese women suffrage as well as protection from gender-based discrimination.” Kirkus Reviews