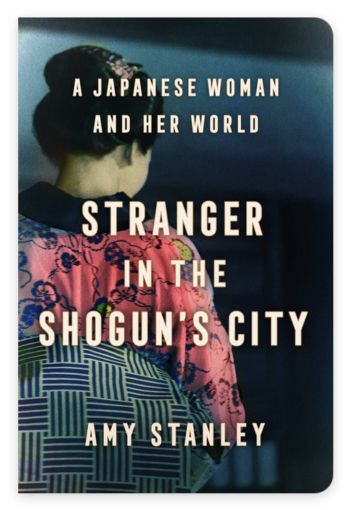 Stranger in the Shogun’s City: A Japanese Woman and Her World

Immerse yourself in nineteenth century Japan and join us as we explore Amy Stanley’s Stranger in the Shogun’s City: A Japanese Woman and Her World, finalist for the Pulitzer Prize in Biography, winner of the 2020 National Book Critics Circle Award, winner of the PEN/Jacqueline Bograd Weld Award for Biography, and shortlisted for the Baillie-Gifford prize. Teachers who sign up for one or both programs will receive a free copy of the book Stranger in the Shogun's City and will be expected to read the book ahead of the programs.

Curl up in your chair and follow the extraordinary life of Tsuneno as she moves from a rural village to one of the largest cities in the world (Edo/Tokyo). Then join EARC seminar leader Tese Wintz Neighbor for an online book club, and share your thoughts about “the life of an ordinary yet extraordinary woman.”

We are thrilled to follow up this book club with a conversation with the author. Professor Stanley will discuss how she was able to reconstruct Tsunemi’s life and world by letters, diary entrees and family papers.

About Stranger in the Shogun's City: A Japanese Woman and Her World

The daughter of a Buddhist priest, Tsuneno was born in a rural Japanese village and was expected to live a traditional life much like her mother’s. But after three divorces—and a temperament much too strong-willed for her family’s approval—she ran away to make a life for herself in one of the largest cities in the world: Edo, a bustling metropolis at its peak.

With Tsuneno as our guide, we experience the drama and excitement of Edo just prior to the arrival of American Commodore Perry’s fleet, which transformed Japan. During this pivotal moment in Japanese history, Tsuneno bounces from tenement to tenement, marries a masterless samurai, and eventually enters the service of a famous city magistrate. Tsuneno’s life provides a window into 19th-century Japanese culture—and a rare view of an extraordinary woman who sacrificed her family and her reputation to make a new life for herself, in defiance of social conventions.
Immersive and fascinating, Stranger in the Shogun’s City is a revelatory work of history, layered with rich detail and delivered with beautiful prose, about the life of a woman, a city, and a culture.

About the the Author

Amy Stanley (Ph.D., Harvard, 2007) is a historian of early modern and modern Japan with special interests in women's/gender history and global history. Her first book, Selling Women: Prostitution, Households, and the Market in Early Modern Japan (UC Press, 2012), explored how an expanding market for sex transformed the Japanese economy and changed women’s lives in the years between 1600 and 1868. She has also written about adultery in the Edo period, education for geisha in the first years of the Meiji era, and the figure of the migrant maidservant in global history. Her most recent project is a history of Edo in the early nineteenth century, told through the life story of a runaway divorcee who married a masterless samurai and entered the service of a famous city magistrate. The book Stranger in the Shogun's City was published in 2020 and has been shortlisted for the Baillie-Gifford prize, the UK's most prestigious prize for non-fiction.