Paradise of the Blind: A Novel

Paradise of the Blind is an exquisite portrait of three Vietnamese women struggling to survive in a society where subservience to men is expected and Communist corruption crushes every dream. Through the eyes of Hang, a young woman in her twenties who has grown up amidst the slums and intermittent beauty of Hanoi, we come to know the tragedy of her family as land reform rips apart their village. When her uncle Chinh‘s political loyalties replace family devotion, Hang is torn between her mother‘s appalling self–sacrifice and the bitterness of her aunt who can avenge but not forgive. Only by freeing herself from the past will Hang be able to find dignity –– and a future. 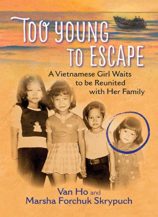 Too Young to Escape: A Vietnamese Girl Waits to be Reunited with Her Family

During the aftermath of the Vietnam War, Van wakes up one morning to find that her mother, her sisters Loan and Lan, and her brother Tuan are gone. They have escaped the new communist regime that has taken over Ho Chi Minh City for freedom in the West. Four-year-old Van is too young – and her grandmother is too old – for such a dangerous journey by boat, so the two have been left behind. Once settled in North America, her parents will eventually be able to sponsor them, and Van and her grandmother will fly away to safety. But in the meantime, Van is forced to work hard to satisfy her aunt and uncle, who treat her like an unwelcome guest. And at school she must learn that calling attention to herself is a mistake, especially when the bully who has been tormenting her turns out to be the son of a military policeman.

Van Ho’s true story strikes at the heart and will resonate with so many families affected by war, where so many children are forced to live under or escape from repressive regimes. 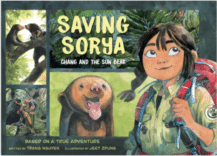 When endlessly curious and tenacious Chang discovers a bear bile farm near her home in Vietnam, she decides to do everything she can to save wild animals—by becoming a conservationist! After teaching herself survival skills, documenting each rainforest plant and animal she sees in her field notebook, and disproving the critics who think she isn’t old enough or strong enough, Chang is finallyaccepted as a rescue center volunteer. But her toughest challenge yet comes when she’s tasked with returning Sorya—the sun bear she raised from infancy—back into the wild. Because despite being a different species, Sorya is Chang’s best friend. And letting a friend go is never easy . . . even when it’s the right thing to do.

With breathtaking art and STEM facts galore, Chang’s daring story is for any young reader, animal lover, and intrepid explorer!